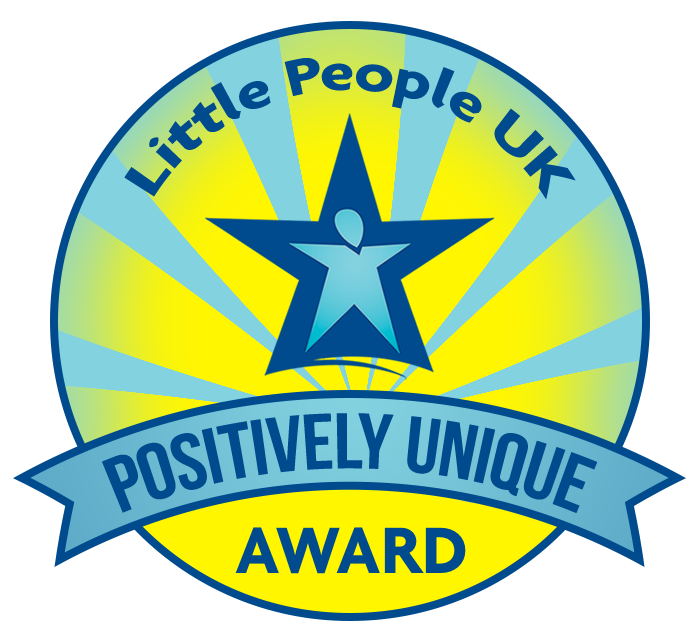 At this years convention Little People UK are holding the Positively Unique Awards for the third time, where we will celebrate the achievements of members of Little People UK!

This has been kindly sponsored by Jay Moyes.

We asked for nominees in three age categories -

We asked that each application must show why the person nominated is Positively Unique; applications were open to people with dwarfism AND average height members of LPUK.

The nominations were sent, anonymously, to the LPUK committee for voting and a winner from each category decided.

Application: The reason for nominating both of these children is because they are the most loving, caring and brave little girls I know. Their mummy and nanny are disabled and they both help whenever they can. They help their mummy by bringing her food and a drink when she is poorly. They tell her stories and draw her pictures to make her smile. They help their nanny. They help her put her shoes on, paint her nails and give her mini make overs. Their nanny is prone to falls and they jump into action if she falls without hesitation. One lays next to her and other goes to get help. A few weeks ago their nanny had a fall they both laid next to her for 3 hours waiting for ambulance. Gave her a pillow for her head, a blanket because she was cold, read her stories they didn’t leave her side the whole time. They aren't asked to do any of these things. They just do it, they are both amazing, brave and caring girls.

Application: I am nominating my son after winning 2018 Lego Masters. He entered the TV programme with his dad, successfully completing the auditions and making it through to the last 8 teams to appear on the show. His winning build incorporated a fully functioning Mutoscope which was a world first in Lego. Given from an early age our son struggled with self confidence socially and at school because of his disability resulting in a very limited circle of friends. Growing older this circle of friends became smaller and the only constant in the background for him was Lego.

Our son has Morquios an ultra rare genetic disease. He has undertaken multiple surgeries including spinal fusion warranting wearing a heavy metal halo for 3 months during winter. He horrified his surgeons by producing photos of him sledging in his halo and attaching fairy lights on it for Christmas. Recently having baffled medical science he had a Victorian girdlestone operation to remove both hips this has never been performed on anyone with Morquios and although told he may never walk again he would be pain free from constant dislocation of his hips. He proved them wrong by again getting up and walking with a frame

Application: I met my friend 18 months ago at the LPUK Birthday Party in 2018. In that time, she has gone through hell. She has seen her husband battle and conquer Sepsis, Shingles and Pneumonia to name but a few of the obstacles he has to face. Help her daughter deal with her own health and problems she has to face both in and out of school, and up until recently she has had a battle with her own health to deal with whilst away, for what should have been a well-earned break. She just takes it all in her stride, She never moans, she never gives up, she just gets on with it. Through all this not once have I seen her burst into tears. I tell a lie, I have once, when her daughter won this award last year! But on top of all this she has to deal with, she is always there for you, no matter what, she is always at the end of the phone, WhatsApp or Facetime ready to give advice. This year’s fancy dress theme is quite apt, she is a Hero and I am proud to say the sister I never had.

Application 2: I want to nominate my wife for this award. I think it's time that my wife was recognised and shown how amazing she is. On a daily basis she overcomes so much just to be a wife and a mum. After my life changing stroke and sepsis she never gave up, in-fact she fought and continues to fight for me and our daughter for the best possible outcome. Everyday life isn't easy, she lives at home with our daughter while I'm at rehab, to hopefully get back to be half the man I was. But there is more to it why I want to nominate, not only for the above but also the fact that we could have crumbled on several occasions, but she makes sure that everyday we life life to the full as well as helping in the community at things like carnivals, party in the parks, brownies etc. She overcomes so much, she goes through so much, and she is simply such a positive role model in my life and lots of other little people’s lives too. She as an infectious smile and certainly lightens up any room, she is positive, kind caring, considerate and certainly unique. People always comment and say if half the population were like her the world would be a much happier place. As you can see I am proud of my wife and would like you to please accept this as my nomination.